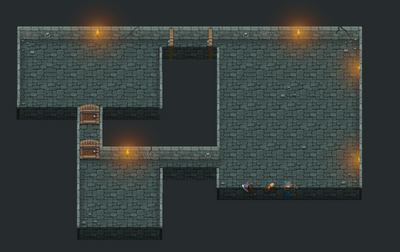 The best news of the day is that during the past 24 hours we managed to collect $2.310 in pledges!!! One of the best days ever (except for the very start) since the campaign has been running! Woot! Thanks, folks - you are amazingly awesome! As the final power pledge drive: Artifacts still is running (until the 24th of August... time's running out here) this means that ADOM 1.2.0 will get another +4 new artifacts and +4 new items (the whole artifact pledge drive so far has been good for a total of 7 new artifacts you are going to see in ADOM 1.2.0 if the campaign is successful).

So to have a successful campaign we need to collect another $12.644 as of the time of this writing ($14.644 to get awesome NotEye tile support and $19.644 to get the most beautiful tile set ever - which also would benefit ADOM II! How's that for a double-deal?).

Breaking it down to "pledges per remaining day" the campaign needs to raise a minimum of $842,93 per day to be successful at all, $976,27 per day to get basic tile support and $1.309,60 to receive the most beautiful tile support possible. Exciting times... as all money will go back to the donors if we fail to raise the required amount and the campaign will have failed.

The most important challenge seems to be to get the message about the tile support stretch goal. Many folks asked for it but now it seems that we might have lost connection to them as it took some while to figure out how to do tile support... so if you are active in forums, blogs, Twitter and Facebook please spread the news about the possibility of tile support. We just need to get the folks who asked for it to also support that wish with some donations! Thanks!

Whatever the result of the campaign might be... it already has shown that the remaining ADOM community still is among the greatest ever!!! Hugs, folks!

Eingestellt von The Creator um 8:01 AM