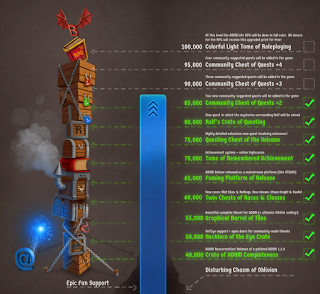 The last 24 hours of the ADOM crowd funding campaign have been nothing but a totally dreamy awesome superduper amazing campaignfest... we stormed five (!!!) stretch goals in a row unlocking everything from #4 to #8, made ADOM the most successful computer gaming project on Indiegogo ever (by a far margin) and now have something like 35 minutes to even make it the most successful gaming project ever and unlock stretch goal #9: three more epic community quests!!! If we make that, too I'll add in another free one map mini quest as the topping!

So in short summary (more later on when I manage to catch breath): Stretch goal #8 (two more epic community quests) has been unlocked during the night and we are in to the final race about stretch goal #9 and becoming the most successful gaming project ever on Indiegogo!

Is there enough air for yet another surprise?

(yes, we know that the +4 in the image is wrong - we right now only are at the +2 pledge level but as we never thought we'd get that far we didn't prepare an appropriate image ;-) )
Eingestellt von The Creator um 7:58 AM