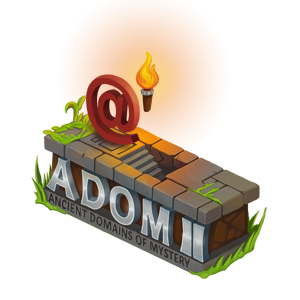 Today I am happy to announce the opening of the ADOM II merchandising shop. The great response to Krzysztof Dycha's logo design across all channels and some requests for merchandising stuff tempted me to try Cafepress as the host for the online shop. This is a first for me and I have taken all care possible to take Cafepress's technical specifications into account - thus I hope you will enjoy the stuff in the shop.

I know there are requests for some items not yet featured (e.g. a Drakalor Chain poster map) - these things will be added over time.

If you have more ideas or wishes post them here or mail me at creator(at)ancientdomainsofmystery.com.

Today we (Krzysztof Dycha - winner of the ADOM II design competition and I) are asking for help from the community. Krzysztof has done amazing work on the design of the future ADOM II logo and also created a great template for the website. But now we are facing challenges where we need help.

On the complexity of missile combat

This bog post is the kick off post for ADOM II 0.3.0 development. The past two days did not unearth any particularly disturbing bugs in ADOM II 0.2.7 (although a couple of very nice enhancement ideas and game balance improvements already have been suggested). According to my evaluation none of them are harmful to the enjoyment of the game so that I decided to move on and start the development of ADOM II 0.3.0. I already have updated DevState in order to inform you about the most pressing issues I want to tackle with ADOM II 0.3.0. Despite "release early, release often" 0.3.0 is going to take a while longer (it probably will get released around the end of June).

Although I originally intended to start working on ADOM II 0.3.0 today one more game breaker has shown up. As I do not like to have such bugs out in the open I fixed that one and added another couple of enhancements to the game. How's that for "release early, release often" ;-) ? I hereby declare my way of developing to have changed successfully.

I'm happy to announce the release of ADOM II 0.2.7. It has been 13 days since the last release and maybe this number will prove to be a lucky one. Again I fixed many bugs and worked on some balance issues. Additionally I added some minor details to the game. I really hope that no more major bugs will pop up as I'd really one to start working on ADOM II 0.3.0 - but that only makes sense if the current release track finally is stable enough. I actually played this release many hours and did not encounter any more bugs - which doesn't mean anything but at least I'm hopeful ;-)

The next release is near. I have two minor bugs left that I'd like to investigate and I need a couple of hours of testing, but so far things look very well. I hope to release 0.2.7 on either Friday (yeah, today, German time) or on Saturday. Wish me luck while testing - 0.2.7 should be a very nice release.

Lucas Dieguez has posted another batch of the scores he has created for ADOM II. As for the initial Battle March I'm totally in love with the stuff. Starting with ADOM II 0.3.0 I will start integrating the scores into the game - something I'm totally looking forward to.

Hi everyone! The tireless master bard Lucas Dieguez has provided my with a couple of short tunes (in addition to his longer compositions) for special situations in ADOM II:
The question now is...

The most annoying bug so far...

Currently I am trying to locate a bug in ADOM II that I just can't seem to put my finger on. It's the annoying Failed to remove item from item list bug reported several dozen times. I also found a dozen places that causes this problem... and there still seem to be a few.

Today I'd like to point you to episode 33 of Roguelike Radio, graciously hosted by Darren Grey. He asked me to do an interview and I happily obliged. As I won't have a chance to hear the episode before the weekend for myself due to lack of time I just hope for the best - my spoken English is a lot worse than my written English... which should be a warning.

In any case it was great fun to chat with Darren and Tapani - hope you enjoy it, too!

Finally I seem to have struck a balance in the ADOM II keybindings that I can live with (stress: "live with", not "enjoy from the depths of my heart" - but the latter problem seems to be impossible for me to solve while using a bare notebook).

What systems do you play ADOM II on?

As I am preparing to finally use the Bitrock Installbuilder for future versions of ADOM II I would like to get some quick feedback about what kinds of system you are using to play ADOM II on.

As reported this morning the ADOM forums once more fell victim to some hacker attack. For now it seems that all effects have been removed. If you want to be 100% sure that nothing bad can happen to your account, you might want to change your password. No signs of database manipulation could be found but just to be on the safe side this might be a good idea.

The forum software has been updated and luckily this time the issue tracker did no break, so everything should be find. If you notice anything unusual please let me know and I'll try to take care of it as soon as possible.

Now back to routine... I'm looking forward to the feedback and bug reports concerning the latest release!

Very bad start for the new idea: It seems that www.adom.de/forums (at least) got hacked once more. When I entered the site this morning an applet asked for permission to do "something" on my local computer. There seems to have been code injected into the forum software (once again), here's the piece of code responsible for the problem on the page itself:


Naturally you never should allow that access. Please be careful and refrain from using the forums for now until we know better what has happened. Needless to say that this once more is a major setback for me as it took days and days last time to sort that stuff out and I fear for the worst :-(


Needless to say that many thoughts of exterminating those f**** hackers currently are crossing my mind.

"Reease early, release often" now is fully underway. I hereby set a new world record by announcing the third release of ADOM II (0.2.6) in one weekend.

And before anyone complains about lack of quality control - the policy so far was to collect all the bugs for weeks and then release a new version. The new pace really to me feels like a great improvement as the number of critical bugs despite the huge load of changes is going back quickly and 0.2.6 now really should be immensely playable. At least I hope so. And if I still missed bugs we'll see 0.2.7 in a day or two... in any case that's how I envisioned the original roadmap before getting sidetracked with featuritis ;-)

I'm relieved to announce the release of ADOM II 0.2.5! After yesternights mishappen ADOM II 0.2.4 release with a glaring bug under Windows that even prevented starting the game this new release should work fine on Windows (at least it does on my test system).

All the good stuff described in yesternights release notes naturally also is included in 0.2.5 - so enjoy the game. I'm strongly committed to switching to "release early, release often", so during the next week I definitely only will add minor stuff and wait for bug reports to get them fixed immediately. Additionally I all work on the remaining bugs in the bug database. If you find issues with the new release please report them as soon as possible. I'd love to get to work on 0.3.x but that requires a stable base.

Sorry for the trouble with 0.2.4 - that's what you get for hacking and neglecting testing... taught me a lesson I should have known for many many years.

Ok folks, I'm proud to present ADOM II 0.2.4. It has been another two months since the last release but from now on I'm really sworn to "release early, release often" as testing 0.2.4 has been a bitch and I sadly expect quite a number of bugs to be found in the next couple of days as the changes and additions have been sweeping... to say it carefully. Additionally I'm taking a big risk as I currently do not have access to a Windows system and couldn't test under that OS and I was too tired to fiddle together a quick access closed beta test from the outside. So I finally decided to release... and promise to release 0.2.5 very very soon if anything major is found. Which is somewhat likely to happen. But now for the good stuff...

Excerpt from the soundtrack for ADOM II

I am very proud to be able to post a link to the first musical composition by Lucas Dieguez for ADOM II. Lucas has been working for weeks and weeks on various musical scores for ADOM II and I personally am totally in love with them.

In preparation of the pending ADOM II 0.2.4 release DevState finally has once more been updated.
Eingestellt von The Creator um 12:39 AM 0 Kommentare

Sometimes I love my child too much...

My child being ADOM II in this case. I spent the whole evening going through the bug lists in the official bug management tool. And again and again I fail to zip past minor issues before releasing a new version. Which costs days. But I can't bear the idea of my child being covered with warts that easily could have been removed. Independent of "release early, release often" and all that.

Here we go with the monthly review: In a summary April was an unexpectedly slow month for ADOM II.