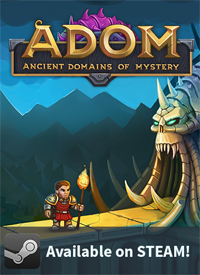 We are happy and proud to announce ADOM 2.3.6, yet another major milestone in the recent series of ADOM releases. ADOM 2.3.6 contains a ton of changes (despite the rather small version number increase), especially related to user interface improvements and bug fixes. It is a full Steam release - no beta fiddling or anything required.

This could be the perfect time to enter the community of folks playing ADOM at Steam as we currently do have a 10% discount due to the Halloween sale - and it's not going to become better than that as we instead intend to continue increasing the value of your purchase by adding more and more content for years to come!

Major changes for ADOM 2.3.6 include: 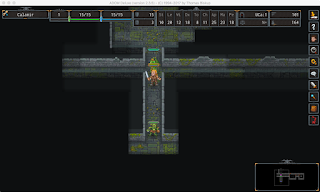 Just a quick update regarding our current work:


So our priorities right now are:
Stay tuned for updates!
Eingestellt von The Creator um 11:33 AM 8 Kommentare

Announcing the (graphical) prerelease of ADOM 2.3.4

Today marks another important milestone to getting ADOM back on track and rolling after this rather bumpy year: We just released ADOM 2.3.4 to our prerelease testers. This release contains the full graphical glory of ADOM Deluxe. Now you will be able to try out tons of amazing features accumulated over more than nine months in our graphical user interface:

ADOM 2.3.4 still is somewhat rough around the edges and a couple of features are still under development (e.g. the personalized and animated PC sprites). We also expect it to be buggy (comparably to the ADOM 2.3.0 ASCII release). So expect to meet some rough spots - but we strongly believe that it is one of the best releases ever.

We now need your support in quickly stabilizing the graphical release in the same amazing way you so far worked on making the ASCII version much better as we now want to do the Steam release as soon as possible to then turn over to much smaller and more regular releases.

As usual the prerelease can be downloaded from the usual location.

Starting today I will be working on the remaining crowdfunding promises. I finally have updated the project flowchart for the current state:

From the flowchart you can see that most of the remaining tasks are now the part that is the biggest fun to me: adding content.

There are still a lot of levels, items & artifacts to be designed and that's the part of ADOM I always enjoyed the most. Immediately after this release we will use a two-pronged approach to continue:
Once we have the next Steam & public release (which will be in October... hopefully sooner than later) we will change our development process to much smaller and more agile releases in much more regular intervals.

And then we'll have some more news at the Roguelike Celebration in San Francisco.