Now that ADOM has been successfully funded since this morning (22nd of August 2012, 02:03am GMT+1) we can focus on reaching as many stretch goals as possible.

Krys has provided this awesome stretch goal chart (which in a couple of minutes also will appear on the campaign pages): 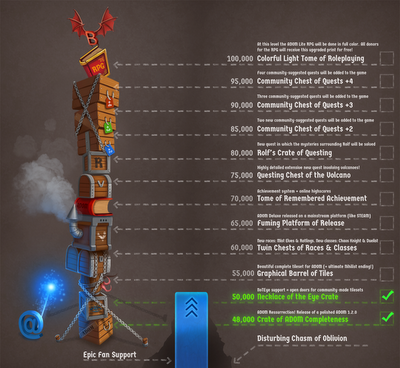 Below you can find the more detailed explanations once again...

As we already have reached $50,000 Jochen, Zeno and I will be doing a basic NotEye integration in ADOM. This will be sufficient to allow the community to define their custom tile sets but we won't be able to provide one by ourselves.

At $65,000 we will create a Steam version of ADOM - the ADOM Deluxe promised so long ago. And we'd try to do our best to also support other platforms like Gamersgate and Desudura. Every donor of $50 or above (and all who pledged for the ADOM Lite RPG) will receive a free license for ADOM Deluxe. ADOM Deluxe will add a more detailed character generation process, restorable save files, challenge games and some other neat details for paying customers. Why paying customers you might ask? Because it's all about a sustainable lifecycle model for ADOM. As has become clear from the campaign we'll be able to fund some ADOM development - but we still are looking for a sustainable model. I believe that with the addition of tiles and audio tracks ADOM has all the potetial to become a tiny mainstream success - and that's why I have defined this stretch goal despite other voices from my call for votes to the right of this blog. Because I believe that this might be the one chance to earn some continuous income from a much larger audience which in turn would allow the continuous financing of the free version of ADOM as well as the commercial Deluxe version. So it's a gamble but it seems to be a good one to me.

So that's what I got. I hope that you like some of the ideas even if I again decided to not totally comply with majority votes. But I believe this order to be the best for the game. Now let's just hope that some rich person picks up the $50,000 pledge level (warning: I have learned that this probably won't work directly through Indiegogo - it seems that you need to contact them and arrange some kind of bank transfer... don't ask why I learned that ;-) But you don't want to wait until the last moment if you are either a very rich or a very generous person ;-) ).