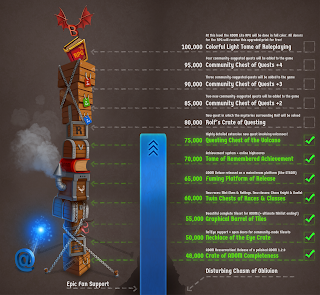 You did it yet again! You are truly the best community ever! So we made the $72,500 in the ADOM crowd funding campaign, Jeff Royle cashed in his promise and *KABBOOOOOM* - $75,000 and stretch goal #6 has fallen: ADOM will get the volcano quest - a truly extensive and world shaking thing that will get all my love, creativity and  energy. I really hope that you will love it :-) Jeff is the second mortal to rise to the status of mega legend and he'll also receive some very special treat to immortalize him in the game. Things to be discussed later on ;-)

And that's not enough: We are still moving forward at tremendous speed: Although we still have $3,685 to go to unlock stretch goal #7 - the quest for Rolf, yet another extensive mega quest that will allow me to return to one of my oldest RPG characters (yeah, that's where Rolf comes from) - I'm pretty sure that we have a very good chance of making that goal, too. It's $284 per remaining hour but right now we are doing this easily... so let's see if yet another legendary story can be brought to a closure.

Just in case... yet another wonder happens and someone picks up the Demigod pledge level, here's the next stretch goal list (we have no graphics for that and I don't think it's realistic - but I wanted to mention them just in case):

Ok, just to have it mentioned in case you manage to surprise me beyond my wildest dreams ;-)