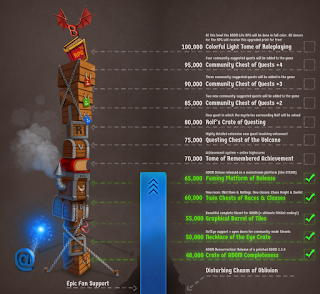 Wow, wow, wow. I'll need to recover for days from the excitement. The ADOM crowd funding campaign is entering the very final hours - 27 to go at the time of this writing.


We made it yet again.

And now more exciting things are happening... that might allow us to get to the next stretch goal #5 (achievements & highscore server at $70,000) and even towards the $75,000 (stretch goal #6: the highly elaborate and detailed volcano quest). The following facts will make the remaining 27 hours a hell of an exciting race towards the end of the campaign:

I've already vowed to make the volcano quest very special - I'll now add that I'll make it a world shaking event if we get that far.

I'm not sure how I'm going to concentrate on real life today. All this is just remarkable beyond any means. Keep it up folks, you are truly
Eingestellt von The Creator um 6:48 AM