The state of ADOM (rank #11 on Steam Greenlight)

Today I'd like to summarize the state of ADOM in a somewhat more encompassing manner. Steam Greenlight is progressing exceedingly well (right now we are ranked at #11 out of 1665 titles (!!!) on Steam Greenlight and the trend is pointing upwards) so that I have changed my planning (once again) in order to prepare for Greenlighting in the (hopefully) near future - maybe in the next batch.
On Steam Greenlight:

Our unexpected but indisputable success (so far) on Steam Greenlight (I'm once more excited, elated and extremely happy every time I look at the statistics) by so far reaching rank #11 out of so many titles is flattering and a big responsibility. I want the first ADOM Steam release to be truly excellent as that will be the impression we will be giving to a much larger audience and as the saying goes: "You don't get a second chance for a first impression". 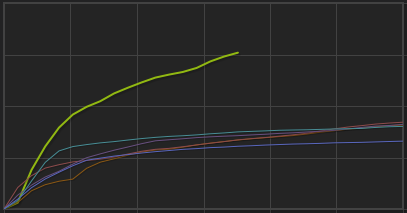 Next are the top 10 - an awesome chance and honor for the brief amount of time we have been on Steam :-) Hopefully we make that goal, too.

As a consequence of the success so far I have postponed the work I originally intended to do this and next month - finishing ADOM Lite RPG and the majority of the other physical rewards from the crowd funding campaign. IMHO it's an important (and somewhat painful) step in order to focus all energies on the upcoming Steam release (for the reasons mentioned above).

In the past week I have spent endless hours trying to build up a press mailer, contacts and new social connections (mostly on Twitter, LinkedIn is still on my to do list) and this work slowly is starting to show some results. In the future I plan to have set up an automated press release and news distribution system in order to regularly contact important sites and outfits. Marketing, publicity and visibility (sadly) are a major important point for the success and longevity of ADOM and so it's only correct to spend more time on that.

I got some positive feedback and a couple of short postings have emerged to increase visibility: we now are on IndieDB I wish folks would be doing more to increase our visibility - sometimes it seems that it would be better to stop all our download servers and stuff in order to redirect traffic to important social nodes), we are on LGDB, we have a news posting on PCGamesN (yeah, I posted that), gamershell posted a short note and KillScreen had a short note. Also the Octopus Overlords chose us for their Lime Greenlight list (here and here). Additionally several reviews promised to provide coverage within the next week or two - keep your fingers crossed! If you know of other important sites or persons I should get into contact with let me know. Sadly so far from about 150 press contacts I collected only a very few responded (which is natural - this is hard work and needs time).

The next additions to the game will be mostly related to making an awesome first show on Steam but naturally will also be beneficial to the free version of ADOM (at least some of those things).

Whenever I feel like it I add more and more achievements to the achievement system that Jochen devised. My guess is that we will have around 60 to 80 achievements with the first Steam release.

In parallel I'm working on three major enhancements for the graphical mode of ADOM (and maybe at some point also for ASCII mode), all related to mouse support (which I then need Jochen and Zeno to integrate with NoteEye):

This is yet another thing to make ADOM more accessible to casual gamers (and naturally will also require more hints in the tutorial mode).

On NotEye Development / the graphical mode:

Zeno has been spending a lot of energy to port NotEye from SDL 1 to SDL 2. The results are awe-inspiring. Not only has performance at least doubled (wait for the next release :-) ) but now we also are back in the race for an iPad version of ADOM at some point (there were problems with SDL 1). This in turn adds fuel to the fires of two secret and yet unannounced future sub projects regarding ADOM I will talk about at some later point. And we can add a lot more animation stuff in the future as performance really is so much better.

On the rest of Team ADOM:

Both Lucas and Krys are doing work in their respective areas. Krys right now is very busy doing some additional graphical stuff and he has been very involved in considering a much better UI for ADOM. He churned out a number of very interesting proposals and we'll see where this is heading. Lucas is working on more soundtracks and sound effects (his pet quibble - his experiments to create new effects are awesome). And Jochen as usual is all over the place, especially now looking into the Steam API.

There are other consequences of hopefully going to Steam:
On other gaming outlets:

Once we have the first Steam version out I'm very hopeful to next move to GOG and Desura in increasing speed. The first time is the most difficult one ;-)

I have been considering to go to Gamescom Cologne in Germany this year, maybe even as an exhibitor. Any opinions on that? The cost is quite a challenge (probably around 3000-5000 Euro minimum, work not included, maybe twice that) and it probably would be more reasonable to do that after a successful Steam release. On the other hand it is the one big chance to get lots of media contacts and as a consequence hopefully a lot of coverage - so it might be worth the gamble. Or not. Feedback very welcome.

There are two of them. Both very directly related to ADOM - so work on them actually is mostly work on ADOM (no more side trek projects that never get finished ;-) ). One already is in the demo stage, the other in preplanning. If I were to say more, I'd have to kill you :-) We'll see...

That's it for now. I'll keep you updated. In the meantime please vote on Steam Greenlight (if you haven't done that), vote for us on IndieDB (right column, middle), rate us on LGDB and blog, post, tweet, etc. We need more visibility :-)
Eingestellt von The Creator um 9:24 PM