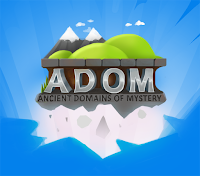 I'm happy to announce the release of ADOM 1.2.0p9 - again available to all donors of Wanderer level and above (Seekers exempted) from the crowd funding campaign as well as anyone who decides to buy into the prerelease program.
ADOM 1.2.0p9 is - as usual - downloadable via the links provided in the ADOM self service portal.

The amount of changes is again sweeping - p9 has been a very active development phase. Among dozens of minor and medium adjustments the biggest new addition to the game itself is the new set of boss monsters. These boss monsters have been defined by donors from the crowd funding campaign and provide special names, descriptions and a set of extra abilities. They can be generated in place of "normal" wandering monsters and IMHO are a splendid and very colorful addition to the game. Some of them probably need a little more balancing but for now I'm very curious about feedback :-)

Here we go with the complete list of changes: