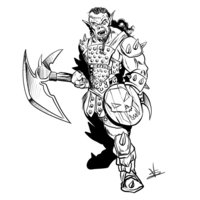 Currently I am implementing the first complex story arc for JADE to show off what I am considering to be one of the hallmarks of future versions: complex, long-running stories that can influence your game in various ways depending on how you interact with them. Despite being spoilerish in many ways I would like to explain the basic setup based on the "King of the Orcs" story arc that will be introduced in JADE 0.2.3 and serve as an example for many more story arc types to come.
The basic idea is very simple: From minor things major changes can develop. And as Ancardia is a living and breathing world (well, the simulation of one) many minor things are going to be happening. Some might be without effect, some might be the catalyst for great changes. Which ones are what might vary from game to game.

JADE 0.2.3 will illustrate this will a small and still pretty straight-forward example which will be elaborated with twists and turns over time (and those won't be spoiled here ;-) ).

Imagine a young orc prince living in the mountains, Fnuk III by name. He is discontent with the rule of his aging and bumbling father and suffers when seeing how weak his tribe has become. He decides to lead his people to greatness and conquer Ancardia, himself vying for immortality and might.

As things go one night his father chokes on too much food (or something else?) and Fnuk III suddenly moves into the position of being the new king of his tribe. With iron hand and vicious guile he starts to subvert the neighboring orc tribes, slowly and rather stealthily laying the groundwork for a small orcish empire.

He proves himself to be a competent, ruthless and efficient leader, uniting more and more orcs, killing contenders and getting the support of less will-strong lackeys who understand that they can rise to more power in the shadow of Fnuk than they ever could on their own.

So Fnuk slowly (over months and years of game time) forges a hidden empire (you might find it if you know where to look) and slowly his marauders start to spread over Ancardia. (Yes, there will be bands of marauders moving around on the world map if this happens - searching for settlements to attack).

If nobody stops Fnuk his might will increase and bands of marauders will transform into stronger and stronger armies that finally will be able to besiege and destroy cities. Fnuk in the meantime will be already working on his next achievement.

And... barring unlucky meetings with some hero... he at some point will assume the position of Fnuk Longtooth III, emperor of the orcs. You may guess why he assumes this extended name. The title should be evident.

From that point onward immortality no longer seems to be his primary drive but he will start to mettle with the gods themselves... vying for a position among the immortal gods of Ancardia. Whether he will be successful in that endeavor, too, depends on many things and those I won't spoil.

Let's just put it like this: While this story is straight-forward so far there are more than enough places to alter it... Fnuk might fail to kill his father, quickly ending the whole thing (and leading to the fact that in some cave an ancient, decadent orc king is sitting until he meets his end at the hands of some hero or villain), Fnuks armies might find some other dungeon from another story arc, conquering it and allowing him to become Fnuk III, wearer of the crown of evil - who is quite different from Fnuk Longtooth (and would change the means by which the PC might get his hands on said crown which again would be usable for good or bad in some other story arc). And should Fnuk manage to raise to godhood he even might become a deity actively worshippable by the PC. But if the PC dared to face Fnuk in his less powerful days and had failed to defeat him (obviously in that story variant) the PC might have won a new personal enemy of previously unknown might.

And so on. One tiny story with so many options for interesting twists and variants. All this will only show its true depth over time as more and more of such story arcs evolve. The first ones still will be my testing ground to add features to JADE which later on allow me to build such stories a lot more easily but since the basic infrastructure for all that is already there I am currently having a blast implementing the first more complex story arc in JADE.

What do you think?

P.S.: Yes, you will be able to fight armies and might get involved in settlements being attacked by hordes of orcs. Naturally ;-)
Eingestellt von The Creator um 7:38 AM