I'm somewhat late with my planned Ultimate ADOM update... here we go with bits and pieces.

But first the reason for being late:

Actually we are getting prepared for Roguelike Celebration 2018 in San Francisco. There we will show a first live demo of Ultimate ADOM: Caverns of Chaos, our upcoming attempt at building the ultimate roguelike dungeon crawler in a world with details never seen before. (well, maybe in Dwarven Fortress... in some respects... but we are working on building an easily accessible game with tons of depth and surprises ;-) ).
While preparations are underway we decided that we will start seriously speaking about Ultimate ADOM beginning with the presentations at Roguelike Celebration 2018. One part of this is that we currently are preparing a separate new website for Ultimate ADOM that also will contain a blog so that we have a focussed communcation channel for all news regarding Ultimate ADOM.

We have spent the past 8+ months building the underlying game engine for Ultimate ADOM (called AGE for ADOM Game Engine) which in turn is using Unity as a technical platform so that we can more easily ship Ultimate ADOM on many platforms.

AGE is a platform agnostic game engine controlling the game flow and everything that exists in the worlds of Ultimate ADOM. It's Unity-inpendent (although we have no plans to use something other than Unity) and uses an Entity Component System architecture for modeling everything - with refinements to the basic architectural approach to allow us to be even more flexible and build worlds of incredible depth.

The past months have been spent on building many of the basic features needed for a deep game (and there are still quite a few months ahead of us for building more of that).

While I now could start talking about our detailed skeleton infrastructure modeling the shape of bodies (and allowing for amuptations and grafting), our breath-taking new magic system (in which I just added spells for animating inanimate objects), our system for possessing/controlling arbitrary monsters, our growing in-game physics simulation allowing more and more complex interactions with the environment (from freezing water over boiling it to steam clouds, push mechanics and more) I'll defer doing so until we start presenting stuff at the beginning of October.

Additionally we are heavily working on our graphics and sounds for the game as well as lots of concept art (some of which I already posted).

Please follow my Twitter account where I occasionally tease things if you feel you need infos now... everything else will have to wait a little more. Next week we will be finalizing our communcation plans for the weeks and months to come and then we'll see!

A short video demo of bits and pieces of the new ASCII animation system:

Just finished the basic #ASCII #animation #framework for Ultimate #ADOM. The video is not perfect but should give a basic idea of what it can do. Will next be used when targetting spells (and more stuff in the future). #indiedev #roguelike #gamedev pic.twitter.com/vMZC7FsTsK
— Thomas Biskup (@adom_dev) 8. August 2018 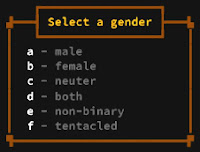 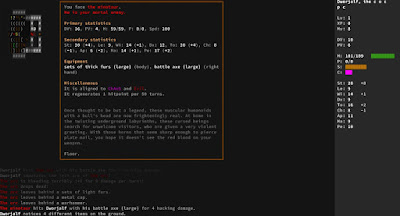