Sorry for having fallen silent for so long - we have been awfully busy working on Ultimate ADOM, especially now that Roguelike Celebration has been moved forward by one month in the calender (6/7th of October in San Francisco - come and join us for a weekend of roguelike fun!).

This post only is concerned with an update regarding ADOM - more details about Ultimate ADOM to follow by the end of week (and regular once more from now on). 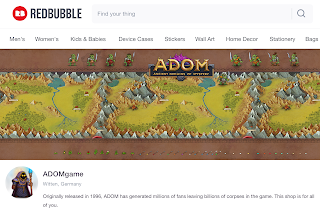 First thing: We have opened up an online merchandising store for ADOM goodies because we had been asked about that quite often in the past 24 months. So here we go. If there are things you would like to see there we don't yet have let us know - either in the comments below or via our ticket system.

At a later point we also will be adding Ultimate ADOM stuff.

For ADOM itself we currently are working on two features:

We finally port ADOM to GOG (and GOG Galaxy). We are not yet sure when the port if finished but target end of August / September (there are some C++ things in the API that we still need to work out).

Then ADOM finally can be puchased DRM free at GOG.

Another older ticket will be one of the main features of the next content release - floating status information (damage numbers, special effects like poison, sickness, starvation, etc.). While this might seem rather minor it will be a huge UI improvement as our tests have shown that many people nowadays don't read the status messages at all (and many more just skim them occasionally). Thus important information easily can get lost. Now seeing a message floating up over the head of the PC will alleviate this.

This major addition will be combined with many minor bug fixes and game balance adjustments for the next ADOM release (which hopefully will be on Steam by the end of August).

That's it for today... stay tuned for tons of Ultimate ADOM updates (working on which takes up about 95% of our time right now).