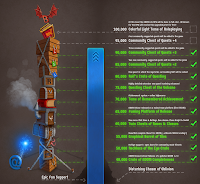 Today - as a special treat honoring Roguelike Celebration 2017 - we are very proud to announce the release of ADOM 3.0.0 as a prerelease test version. ADOM 3.0.0 is one of the most feature-heavy releases we ever have done as it wraps up most of the remaining crowdfunding promises. As a consequences it includes:


The changelog has the complete list of changes as usual.

ADOM 3.0.0 can be downloaded for prerelease testers from the usual location.

All this should make for an exciting new release. After it has been extensively tested it will take the usual route first to Steam and then to the general public.

We are very happy about now coming to a conclusion of our crowdfunding campaign and we are looking forward to the next exciting things looming on the horizont.