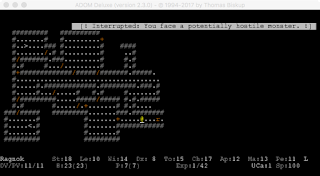 After the longest break (pardon the pun) since the Resurrect ADOM development crowdfunding campaign we finally are getting back on track. Tonight we released ADOM 2.3.0 (r73), a special release in many respects:


The prerelease is available via the prerelease tester access. Follow the instructions and start playing as soon as possible :-) The change log can be found here (also as usual).

Please use our bug reporting system for all your findings. Discussions about the changes are especially welcome in the ADOM forum. We want to get any problems sorted out as soon as possible, because our roadmap looks like this:
On a side note we (again) changed the version numbering system:
Ok, we return to work immediately. So much to do and so many plans :-)

See ya soon with the next release!

P.S.: Here are some of the mind-blowing changes of the upcoming graphical release on which all of Team ADOM have also been doing amazing work:
Eingestellt von The Creator um 11:35 PM