Weekly Progress Report - A Sneak Peek into the Donor Rewards.

No seismic changes since last week. Physical crowdfunding rewards right now are in our focus. Just dropping in to give you a peek at the Arcana suplement unboxing and the Boxed Edition cover.

TB: Donor rewards. Preparing Code Certificates, Poster Maps and Boxed Editions for print and later - shipping. Finally! A major Indiegogo promise fulfilled. Also organisational stuff. ADOM Arcana is taking another round of revisions as the first printing contained a number of errors (the new Lulu process really is detrimental to TB's PDF publishing workflow). Here's the overdue unboxing video for the first printing - currently waiting for the second:
JT: Community Highscores. Started with UI, but it goes *much* faster with Zeno around for support, so until he's free JT's fighting with more technical stuff.

Lucas: Music. It's like with the mad minstrel, sometimes I'm afraid to ask ;)

Krys: Preparing donor rewards, especially the cover for ADOMs boxed set. Also lots of animation bugfixing on the current batch of monsters. Here's a quick preview of the ultra-limited ADOM Lite RPG Loot Box for the selected few who are going to receive this: 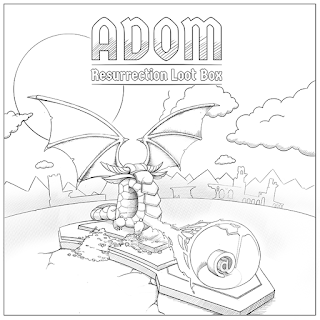 For the boxed edition cover we wanted a really oldschool feel, and to me personaly nothing says 'old school' like the old Middle Earth RPG (MERP) book. Let's stop here, there's always a risk I'll nerd out about Danforth's art inside and McBride's cover.

Take care of your poison, and see you next week!
Eingestellt von Ravenmore um 12:45 AM