Over Christmas (Merry Christmas to you all - hopefully you had one... I was too busy to post anything ;-) )... ok, I am starting again: Over Christmas I finally had a vision for a complex architectural question that bothered me with ADOM for a very long time. A question so important to me that it originally caused me to start writing ADOM II (JADE). Read on to hear a bit about fascinating new venues that are opening... and have been revitalized by my thoughts about what we are going to do with ADOM in 2016 - team play being one very important thing very dear to me right now... but I'm digressing again ;-)

Regarding the complex technical questions mentioned above: Distributed games are characterized by the fact that separately running instances start to interact with each other. Sometimes in simple ways (e.g. displaying a chat message from another player), sometimes in more complex ways (e.g. actual multi-player gaming where people share a map and the map context).

ADOM always was designed to be strictly single-player (and no, this probably is not going to change... at least not towards multi-player). While pondering the major tasks for 2016 (another blog post will elaborate on this) one topic became more and more important to me - especially due to our new presence on Steam and the new communal spirit (and technical possibilities) arising from that: I e.g. had been thinking quite a bit about team play aspects for ADOM (and I think I have some very good ideas there).

The biggest technical hurdles contained in ADOM to such an endeavor are twofold:

So for a long time my firm conviction was that it would be impossible to change the REPL architecture. As many things become very hard to implement due to the REPL nature the game I at some point started designing and implementing ADOM II, which from the very beginning used an event driven architecture with timed events and thus already in its current primitive state allows tons of stuff that is very hard or impossible to do in ADOM (e.g. flowing and expanding lava, complex animations, mana waves activating items, etc.).

But things have changed in regard to ADOM. Many puzzle pieces now are coming together to a very interesting juncture in the lifecycle of ADOM: 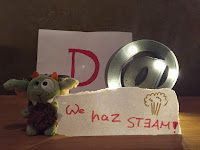 The roadmap resulting from the crowdfunding campaign also mostly covered extending the current nature of ADOM rather than introducing truly new innovations. This changed for me personally when we finally managed to launch on Steam on November, 16th, 2015. Suddenly we are part of a community with extensive multi-player offerings, chat support, achievements, network infrastructure and so much more. Since that day I have been pondering true innovations for ADOM. The current - IMHO still pretty lame - crowd mode is one such shade of a good concept. While I still believe that something like multi-player probably never will be possible for ADOM I have become enticed with the idea of a team oriented play mode and I have very specific ideas for that. But those ideas require a different architecture than what ADOM currently has with its REPL system.

I started prototyping it three days ago and a couple of thousand lines of code and a few dozen experiments and refactorings later I believe that my current prototype for an event based architecture is going to work and will be the foundation for future versions of ADOM.

The current state is:
And what's missing? Quite a bit but nothing that is beyond being solvable (as far as I can see right now - keep your fingers crossed):
What benefits will this entail? Basically you should search many of my older ramblings when I started working on ADOM II (JADE). The new system allows for complex timed interdepencies, generally the code becomes more modular and easier to maintain and features that have been very hard to do (if at all possible in the past) now become rather easy to add. Think of in-game features like:
And think of team play features (no more spoilers for that - I'd love to surprise you all at some point in 2016).

As you can see I am currently quite excited and will dive back into working on the new event based architecture immediately. It beckons of a future full of real innovations I never dared to dream about for ADOM :-) 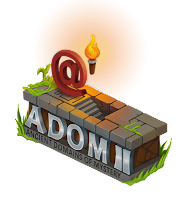 P.S.: I have no idea what this means for ADOM II. For now I'll work on backporting the good architectural ideas from ADOM II to ADOM... and then we'll see what the future holds next.