A Happy New Year to everyone out there! 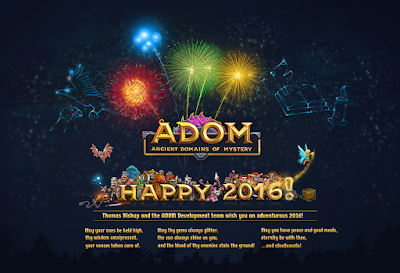 Additionally we released 11 versions of ADOM in 2015 (which is better than the 9 times in 2014), but some of those releases where rather small or confined to Steam.

Looking at the evolution of ADOM 2015 has been a year mostly of fine-tuning and bug-fixing. Star sign selection probably was the biggest new feature although we put tons of work into fine-tuning the user interface. While most of the changes either are in the graphical interaction (e.g. with more and better animations) or in the way ADOM can be played via the keyboard they have been very important and mark a road we will continue to dwell upon.

The biggest success for the lifecycle of ADOM probably has been the Steam launch. So far it went exceedingly well and while I know that many readers don't like it when I start talking about money I will continue to be clear and transparent about this aspect of game development:
Where did we fail?

I again failed to live up to our planned timeline. For 2015 the reasons were different from 2014 but the end results are frustratingly similar as we are still far behind the schedule:
Is there a good news about it? I hope so. Now that we fresh income from Steam (and it currently seems to be continuing at a reasonably stable level) we will be able to invest a lot more time and energy in 2016 and we definitely will use the chance we have. More on this below in my plans for 2016.

Basically I envision three areas of work, in the following descending order of importance. For each of these major work items I have created a specific milestone in our issue database in order to check the main tasks and the progress for these work items (links below):

Besides that we will be adding all kinds of goodies to ADOM for a vibrant and exciting lifecycle in 2016. We have created a fourth milestone to compile a "best of" idea list, which we will use to select RFEs and implement them while working on the three main points above.

Personally I regard task #1 as totally mandatory and of top priority, task #2 as a very important and continuous effort and task #3 as maybe the most important feature for widening the potential audience of ADOM.