It's shortly before Christmas and sometimes wishes are fulfilled earlier than expected: We are going to release the ADOM Roleplaying Game starting next year.

To my own surprise the most requested "ADOM feature" in a long while has been access to the ADOM (Lite) RPG. The ADOM Lite RPG is a pen & paper version allowing you to relive the adventures of ADOM in a classical pen & paper experience. It was initially created during the "Resurrect ADOM" crowdfunding campaign as a highly limited edition never to be reprinted after the campaign. A promise we kept. Which caused a lot of grief to many people who missed the campaign and would love to play the pen & paper game. 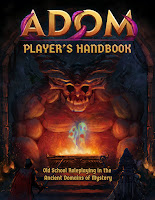 We are keeping the original promise - but now are going to release a new pen & paper roleplaying game based on the Open Game License (OGL). Rewritten and redesigned from scratch,  the OGL ensures ADOM RPG's compatibility with a plethora of old school renaissance (OSR) games out there. At the same time we improve upon the standards of most OSR games by wrapping the rules in a beautifully laid out set of two rulebooks with immensely readable typography and tons of amazing artwork.

The ADOM RPG will be kickstarted in January 2019 (yes, we are going to do two Kickstarters, the first one for the pen & paper ADOM RPG, the second one a little later for Ultimate ADOM: Caverns of Chaos).

Starting today the initial version of the ADOM RPG website is up now at https://www.adom-rpg.com - a lot more content will be added over the coming weeks (and we will improve on the website 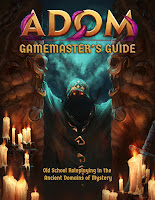 layout). The roleplaying game will be published as two manuals - the Player's Handbook (PHB) and the Gamemaster's Guide (GMG). Both will be available in full color printings and bound in hardcover. We probably also will make available budget B/W softcover versions. The Kickstarter (which will start in January 2019) will offer the cheapest access possible to both manuals (print at cost basically). Stretch goals hopefully will add a lot more content (and might yield adventure modules and more).

See the samples section of our new website (and the single image below) for impressions on how the ADOM RPG is going to look like.

Thanks for listening - we are looking forward to your feedback! 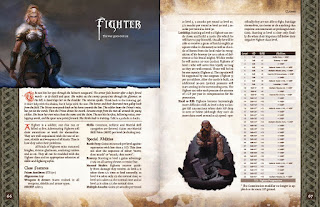