The physical side of ADOM

Today I'd like to provide some insides into the physical side of ADOM. Before the Resurrect ADOM development crowdfunding campaign there did not exist any real tangible assets for ADOM - which changed during the crowdfunding campaign where I promised things like postcards and pen & paper roleplaying games & boxes.
Although these rewards probably helped greatly to push us past the $48.000 boundary in hindsight were not the best of ideas as they distract so greatly from actual ADOM programming - which was the main goal of the campaign.
So if I ever again were to do a crowdfunding campaign I'm sure I no longer would promise things that would not serve the direct purpose of the campaign. On the other hand it's really nice that finally the ADOM pen & paper RPG (at least in a Lite version) could be born.
As working on that physical stuff (and especially shipping) proved to be a huge time consuming activity I have decided to finish this stuff finally - in April. I want to get all the remaining writing done and also have everything prepared so that May can be a shipping month (a two week holiday could prove somewhat detrimental to that but we will see).

The main thing I'm currently writing is the ADOM Arcana rules booklet that will be included in the $400+ reward level for crowdfunding donors. Seeing there are about 30-40 people who will receive that box (and thus will be the only people ever to receive the ADOM Arcana booklet) the effort to write a 32 page RPG supplement is not the best investment of time and energy. But a promise is a promise and on the other hand it feels kind of cool to create an ultra-limited collectible in an ultra-low print run. So I'm doing my best to create something great in an efficient manner.

Here are a few first glimpses at the ADOM Arcana booklet - we decided to re-use a modified version of the ADOM Lite RPG cover and add a lot of cool stuff to the basic rules.

So the lucky donors of the corresponding levels will receive rules for ratlings, duelists, prophets of chaos and more. Maybe even a talent system (still fiddling with that).

Here's the cover (notice the details changed from the ADOM Lite RPG cover?): 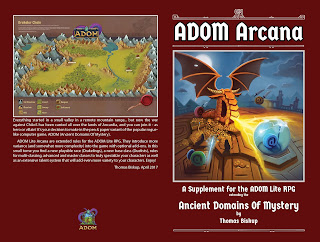 And here a first look at the rules inside: 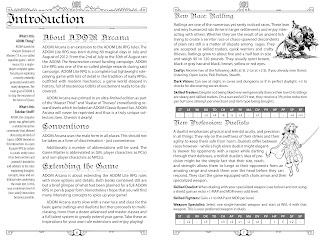 I hope to be done with this stuff end of next week and then work on the shipping. And after shipping the various remaining physical rewards it is finally programming only - I'm so much looking forward to it.

Actually the shipping itself is one of the most annoying activities for many reasons:

And then there is packing the envelopes, gluing stuff, printing labels, etc. pp. All that is really not my thing and draining my energy greatly. But we are getting there. And I can't even begin to imagine the pain of crowdfunding campaigns where tens of thousands of donors need to receive T-shirts, posters, pins and whatever.

Future campaigns (if they were to happen) definitely would only offer rewards in the virtual realm (although I still feel tempted to put up the $50.000 level once more ;-) - just for the fun of it).

Ok, so much for today - I'm back to writing ADOM Arcana. See you soon!