A Glimpse at ADOM Worlds! 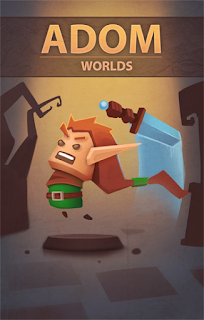 Greetings ADOM™ fans. We'd like to talk about something special today - you'll be pleased to know that we are moving forward with another ambitious project under the ADOM™ brand name. Say hello to ADOM Worlds™!

As a team we decided to move where nobody has gone before and create a Minecraft-inspired 3D roguelike with various influences from many other genres.

The core idea behind ADOM Worlds™ is to build the largest,  most imposing Cthulhuoid Castle. It's a race against time versus four other opponents in local and online multiplayer.

Each game takes place on the barren PlAnE oF cHaOs, which means that incredibly strong monsters, scarce resources and an ever-shifting ground plane will make the game a suitable challenge for roguelike fans.

The winner is determined based on scores for the Castles' volume, mass, real estate value and overall corruptive effects, as well as the average number of cHaOs tendrils per cubic foot. All this assuming the owner survives until the end of the round. The cHaOs PlAnE is indeed an unforgiving place.

Of course block-based Castle building isn't the only focus of ADOM Worlds™. As with any respectable roguelike you'll be able to level up your character. learn skills and abilities, gain items and gold and so on. It's not ADOM™ without all of that, now is it?

All these elements put together should create a volatile mix of "easy to pick up" but "difficult to master" gameplay.

Expect a full list of features soon, and in the meantime enjoy our first teaser image of ADOM Worlds™!
Eingestellt von Ravenmore um 11:39 AM