Back in the saddle again (ADOM Lite RPG update)

I'm back from a wonderful vacation to Namibia (that's the main reason for my silence during the past couple of weeks... Internet was kind of a problem during our trip - if it was available it usually was so slow that it was not fun to do much). Here'a a quick update of what happened in the meantime.
I intended to use the vacation to finally focus more on the ADOM Lite RPG and partially was successful with that. While I had planned to write and layout directly in Indesign I only did this a couple of times, fiddling more with classical pen & paper to wrench out designs for certain subsystems of the RPG. I also spent a bit too much time fiddling with images (but I love doing that, so...).

What I did:
The revised time plan for the ADOM Lite RPG now is that I want to finish the first draft (including layout, I usually can't separate these two things) by end of May latest and then get the draft to a number of people who offered to help with proofreading, etc. I'm not yet sure how to manage this best as I want to keep integrating suggestions and changes as simple as possible but there will be a solution for that when time comes.

Here's a teaser of one of the new pages (with some holes, but you get the drift): 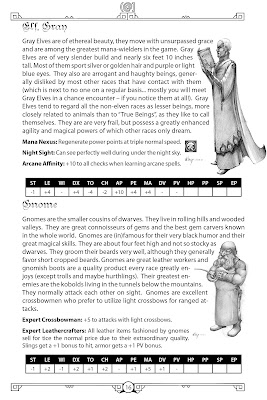 So in summary I made decent progress on number of issues although I also managed to enjoy the holiday ;-)