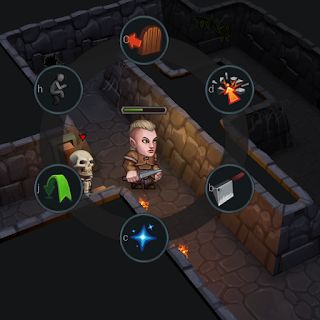 As we're nearing Early Access for Ultimate ADOM: Caverns of Chaos, we want to shine a light on the different approaches to game design for old ADOM players. What can you expect to see in the sequel? What are the changes to the game concept you all love and play?
In this mini-series, we want to highlight the differences between the original ADOM and its sequel, and what the thought processes was behind the decisions.
If you want to see a specific question addressed, drop a note! Yes, diagonal movement is going to be answered.

Why are there only five classes? Considering that ADOM has 22 classes, that's a net loss of 17 classes. Quite significant, if taken at face value.
First of all, we're heading to Early Access for Ultimate ADOM for a very simple reason: It's not done yet. There'll be more classes incoming, though the final number is still up for debate.

Second, and more importantly, classes in Ultimate ADOM are not like classes in ADOM. Let's have a look at Alynna the elven archer up there. They can Sneak, Butcher things and Cast spells among other standard actions from the very beginning - because they decided to spend their skill points in these trees:
Grafting 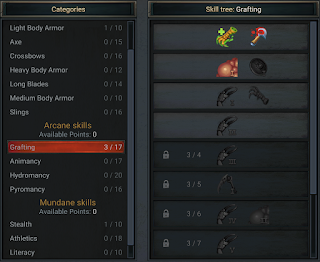 As an Elf, Alynna receives additional skill points in arcane skills. The elf decided to put their arcane talent into Grafting, to make the best use of the many, many corpses they will leave behind. A different elf archer might have invested into Hydromancy to improve their defense or hurl icy bolts at their enemies. An investment into Animancy might have been worthwhile too - turning the very dungeon around you into allies, allowing your archer to keep their distance as they rain down missile attacks at the monsters.
There will be new arcane categories in the coming weeks, so it's not just a choice between these four schools, but many more.
Archery 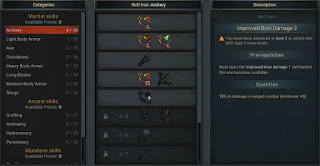 The Archer class will receive extra skill points to be distributed to missile weapons. Right now we have a selection of Bows (Alynna's choice), Crossbows and Slings in the game, but there are plans for including throwing weapons, too. There are advantages of specializing in a single category of missile weapons, as this makes unlocking powerful skills and boosts more easy. A different archer might decide to spread evenly between crossbows and slings, though, remaining versatile and ready to deal with monsters that are more resistant to being peppered with pointy sticks. 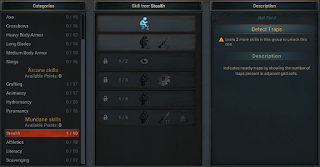 Alynna has also opted to invest a point into the Stealth skill. They could have become stronger and faster, improve their chances for loot from monsters and chests or invest points into literacy to cast spells from scrolls, but a sneaking archer knowing where the nearby traps are and dealing extra damage while being hidden is a very powerful combination.
And that's just the archer class. Let's look at Fira, a female human wizard. She specialized in Animancy (turning objects into companions) and Hydromancy for attack and protection. As a Human, she occasionally gets extra skill points to distribute wherever she wants, and she decided to put some into Literacy and Crossbows - remaining dangerous at range even when out of power points.
Instead of having Necromancer, Elementalist and Wizard classes, there's only Wizards now - but they offer so much more customization than ever before. 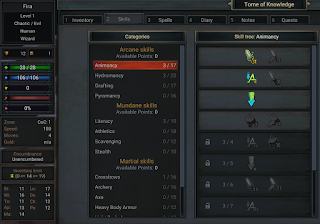 So, yes. Right now, there's only five classes - but no Wizard, no Fighter, no Adventurer, no Priest and no Archer needs ever be the same.

We can't wait to read about your favorite combinations and the adventures they will encounter!
Eingestellt von Björn "Vex" Loesing um 11:43 PM