So, you know, ADOM is at least in part an AAA product - the Advanced ADOM Animations part ;)

As you already know, to have a complete set we need to go through about 550 monster sprites to animate. That's a *lot*. We needed a way to get through them (relatively) fast. One of our methods to speed things up is using a single animation set for all monsters with similar anatomy. For example  all humanoids  share the same basic animation set. That way we still have to prepare 550 sprites, but we don't have to invent 550 individual animations. (The system can be easily extended, so although this is a good starting point it doesn't mean we won't customize the animations further down the line).

We also try to make the animations minimalistic at this stage - so no fancy extra frames, no unnecessary elements, limbs, etc.

This is all well and good, but every once in a while we run into a monster that just doesn't work well within these limitations.

We've had some good honest feedback back in February about the early animation attempts. Just a quick recap of the animation gif that post contained:
Imgur GIF
Out of four monsters shown in that gif three have very noticeable problems. Ouch.

So this week I decided to go back to these and tackle things that fly on bat wings. Seemed to be a good primer for dragon wings later down the line.

There were two major issues that needed to be resolved:

The Large Bat and Air Grue sprites actually had very simplified bat wing anatomy. I guess I wasn't paying enough attention when designing them. And that was probably fine while they were static sprites - noone really complained about un-anatomical bats so far. 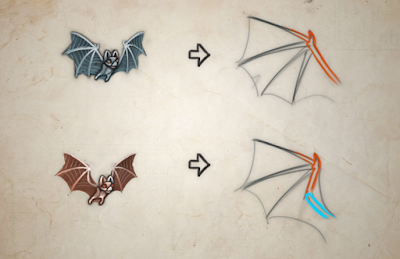 However that particular wing design proved too stiff to animate in a believable way. So I added an extra joint to the wings, to match what a real bat looks like. It's a small change in the sprite, but makes a huge difference in terms of animation quality.

Based on feedback from our early preview it was clear we can't just move static wing sprites up and down (and it seemed like such an ingenious idea at the time!). So we needed to make proper animation frames.
Of course I had no idea how a bat moves its wings. I did a quick experiment with simply flapping the wings vertically and adding some secondary movement, but that looked strangely rigid. It was time to hunt down some reference:

The gif above provided some valuable insight into a bats' flight movement cycle. Trying to mimic all nuances (that leg wiggle!) would be just too time consuming, but it does show how the limbs move in a circular motion, so that explained the stiffness problem - there was just not enough horizontal movement! I focused on fixing that hoping that it will be enough. You can see the results in my animated test sketch below.
ADOMCropped - Create, Discover and Share Awesome GIFs on Gfycat
The last element was synchronising the wing animation with the bat's body. Note how the body is in it's highest point when the wings are low and vice versa. Overall it seems like a pretty good sketch.

So what's left? Cleaning up the frames one by one, adding some thickness to the wings in frames where they are almost prependicular to the "camera". Maybe adding more secondary movement - bending the wings more. Some final touches here and there, and we're done :) Nice bat wings animation that we can export and use with all bats and the Air Grue.

So that's a bunch of problematic animations taken care of :)

Naturally ADOMs diverse list of monsters contains quite a few other unique challenges. Elemental Demons and Vortices for example, especially the ones based on Water and Fire. Also the terrible Annihilator holding orbs of pure void in it's hands and leaving a burning trail beneath it's feet. Fun stuff :) We'll keep you updated on our progress, as always.