It seems that I just manage to keep up with weekly ADOM updates for now (too much traveling) so I decided to call this one the "bi-weekly ADOM update".
I'm again between trips (last weekend having been the 15th anniversary party of QuinScape on Ibiza and me and my wife starting a cruise tomorrow from Kiel in Northern Germany to St. Petersburg and back). So there will be another week without an update as I don't have Internet while cruising.

But I will take my computer with me and my goal is to tackle both the Rolf and Volcano quests promised during our crowdfunding campaign (as well as maybe other new minor content along the way) while Jochen, Krys and Zeno keeping working on the graphical character generation (it's a surprisingly lot of work). 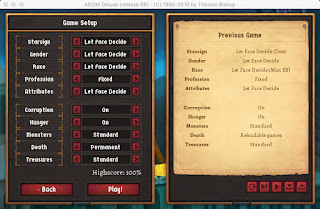 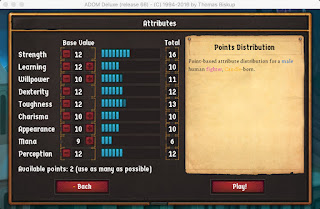 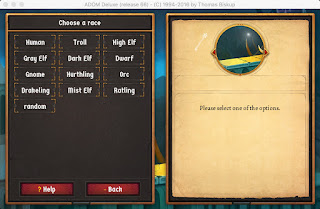 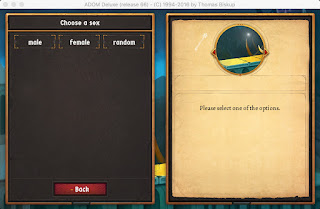 While Team ADOM is still busy working on all the intricacies of graphical character generation (it really seems to be 1:20 time effort to do things graphically) I have been busy fixing various open bugs. Most prominently rank these (and I was kind of surprised that a couple of very ugly bugs were hiding behind seemingly innocent bug report titles):

So all in all I guess I made some good progress there so that ADOM R66 will be a much cleaner and more stable release. My gut tells me there will be some more problems be lurking beneath the surface as the change in the internal code structure was really huge. But it's worth it as we will see with the next couple of content releases :-)

Finally for the ADOM Lite RPG: Progress still is mostly nonexistent but... below you finally can find the unboxing video. I got some help filming the video as my wife preferred to working on our travel luggage instead of helping me filming the unboxing: 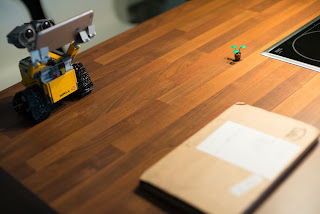 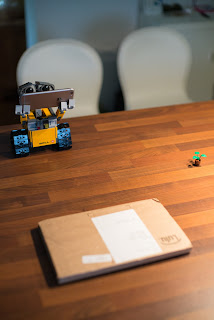 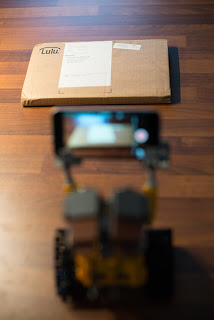 And here's the actual video, filmed by my cute little assistant:

Next steps for the ADOM Lite RPG are:
As this gets asked often: The ADOM Lite RPG only is available to backers of the crowdfunding campaign. I promised that it would be a once-in-a-lifetime thing and so there sadly is no other way to get hold of it. I expect one or the other to show up on eBay as some people ordered several copies but they probably might quickly yield collector prices.

Finally some words regarding ADOM R66 (the next pending ADOM release):
In the meantime I am working on new content features and also am moving plans into position to hopefully have much more time for an intense ADOM coding season from August to October. Wish me luck one that one - I really hope to get most of the stuff promised during the crowdfunding campaign finished this year but as always it depends on bugs, time and some luck (health and stuff) ;-)

Ok, that's it for now. I'm off for vacation now and itching to work on the Volcano and Rolf quests... earth-shaking stuff coming up here - in the truest sense of the word. BTW, I intend to make these quests available during character levels 10 to 30, so that most players can access them. They probably will have lots of side effects and some of them might only be noticeable at much higher levels or tie in to other locations.
Eingestellt von The Creator um 8:36 PM